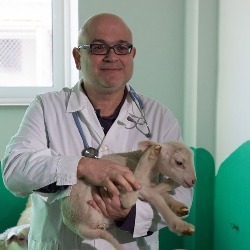 Dr George C. Fthenakis, Dip.ECAR, Dip.ECSRHM, a graduate (DVM) of the Veterinary School of the Aristotle University of Thessaloniki, has undertaken postgraduate studies (MSc, PhD) at the Royal Veterinary College, University of London. He has become a de facto Diplomate of the European College of Animal Reproduction and an invited specialist Diplomate of the European College of Small Ruminant Health Management.
He is Professor and the Past-Dean of the Veterinary Faculty (2016-20) and has also been a Dean of the Faculty of Animal Science (2019-21) of the University of Thessaly. He was the Foundation President of the European College of Small Ruminant Health Management (2008-11). He also served four terms as President of the Farm Animal Division of the Hellenic Veterinary Medical Society (2009-21).
He has been invited and lectured in the veterinary schools of the Universities of Edinburgh, Guelph, Hannover, Liverpool, Thessaloniki and Zaragoza.
He has supervised successfully ten PhD theses and one European Veterinary College specialisation programme. Currently, he supervises five PhD research students.
He has managed 29 research grants, funded by the public (European Commission, Government of Greece) or the private (animal health industry) sector, among them the ‘Goshomics’ (budget: 1,788,500 €, 10 partners) and the ‘Academic teaching experience for young scientists at the University of Thessaly’ (budget: 6,150,000 €) projects.
He has published 229 refereed papers (cumulative impact factor: 485.0). His publications have received 5000 citations (h-index: 38). He has served as editor in Small Ruminant Research, BMC Veterinary Research, Journal of Dairy Research and Journal of the Hellenic Veterinary Medical Society, and as guest-editor in Animal Reproduction Science, Pathogens, Veterinary Microbiology and Veterinary Parasitology. He has authored or edited four books.
He has presented talks in conferences world-wide (494 abstracts in conference proceedings), among them 76 invited/keynote presentations. He was the organiser of the 6th International Sheep Veterinary Congress (2005), the 1st European Conference in Small Ruminant Health Management (2011) and the 11th (2009) and 13th (2015) Greek National Veterinary Congresses.
Currently, he serves as Chairman of the Greek National Veterinary Drug Licencing Board. Also, he has participated in various national or international committees, including the European Board for Veterinary Specialisation, the General Assembly of the Federation of Veterinarians in Europe, the Greek Veterinary Drug Formulary Board, the Council of the Greek Agricultural Academy, the Council of the Hellenic Veterinary Medical Society and the committee ‘Welfare of sheep’ of the European Food Safety Authority.
He has received an Honorary scroll from the Hellenic Veterinary Medical Society (2005), the ‘Allan Baldry’ award from the British Sheep Veterinary Society (2006), a Meritorious award from the Karditsa Society for Animal Welfare (2008) and the ‘Konstantinos Tarlatzis’ prize of the Hellenic Veterinary Medical Society (2009). He was elected a Fellow of the Greek Agricultural Academy in 2010. He has received three Awards of Academic Scientific Excellence in ‘Veterinary Medicine and Science’ by the Greek Ministry of Education (2012, 2013, 2014; only Greek veterinarian to have received these awards), a Prize for excellent academic and scientific achievements by the Hellenic Veterinary Association (2013), an Award of Clinical Excellence by the European College of Small Ruminant Health Management (2014) and a Prize for the excellent and sustained support of the veterinary profession in Greece by the Hellenic Veterinary Association (2015) and a meritorious award by the organizing committee of the 9th International Sheep Veterinary Congress for the significant contributions at the conference (2017).
His interests are focused on health management, diseases and welfare of small ruminants.