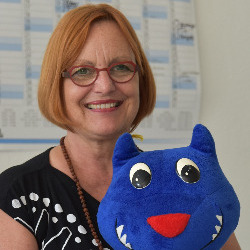 Tiny graduated as a DVM at Ghent University , worked in small animal general practice for 20 years and was certified in Veterinary Behavioural Medicine in France in 1999.
From 1999-2000 Tiny was assigned president of the national public health task force on dog bite prevention, where she coordinated a team of MD’s. Thereafter Tiny became a member of the dog bite research team of the Université Libre Brussels (ULB) and collaborated with a team of pediatricians until 2003 . In 2004 Tiny initiated the Blue Dog Project, a prevention tool aimed at safer cohabitation between children and their family dog.
In 2005 Tiny was accepted as a Diplomate of the European College of Veterinary Behavioural Medicine (now ECAWBM) . Since 2005 Tiny runs a Behavioural Referral Practice in Lovendegem.
Since 2012, Tiny is Guest professor at the Faculty of Veterinary Medicine , Ghent University where she lectures veterinary behavioural medicine of companion animals.
Tiny is a member of the editorial board of the Journal of Veterinary Behaviour (JVB) and reviewer for different scientific journals. The List of Tiny’s scientific publications can be found on Bibliography UGent Tiny De Keuster