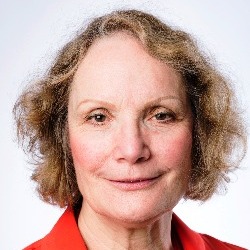 Judy MacArthur Clark is Executive Director of JMC Consultancy. She is based in both the UK and the USA and works globally including in China and Brazil. She specialises in international ethical policy in animal research and healthcare.

Her career spans over 40 years in animal welfare and biomedical research in a diverse range of academic, government, commercial, NGO and consultant roles. Until July 2016 she was Head of the Animals in Science Regulation Unit (ASRU) in the UK Government's Home Office having served as Chief Inspector of the Animals in Science Inspectorate from 2007 to 2011. Before joining the Home Office, she was Vice-President of Worldwide Comparative Medicine with Pfizer Global R&D based in Groton Connecticut and leading a team of scientists and professionals spread across multiple sites in North America, Europe and Japan.

She works closely with colleagues in a range of different countries, including in emerging scientific regions, to co-ordinate symposia and research initiatives. She advises internationally on policy and regulatory revision which promotes a science-led approach to the 3Rs and focuses on research animal welfare and ethical use.

She is also passionate about the integration of human and animal healthcare delivery, particularly in low and middle income countries - the concept of One World-One Health - and is Chair of the Board of Trustees of The Soulsby Foundation (www.SoulsbyFoundation.org) as well as an elected Trustee of the Royal Society of Tropical Medicine & Hygiene.

She has authored over 170 scientific publications, book chapters and major presentations. Internationally, she is a much sought-after speaker having a strong background in authoring scientific and public policy and a well established reputation for presenting complex concepts to lay audiences and the media as well as to scientific audiences.

In 2004, her achievements were recognised with the award of Commander of the Order of the British Empire (CBE) in the Queen’s Birthday Honours. She has also been elected to Fellowships of the Royal Society of Biology and the Royal Agricultural Societies and was awarded an Honorary Doctorate by the University of Glasgow in 2003. She has also been recognised with Honorary Membership of the American College of Laboratory Animal Medicine.

In her spare time, she enjoys trekking, climbing mountains, and otherwise exploring remote places with her family and friends.