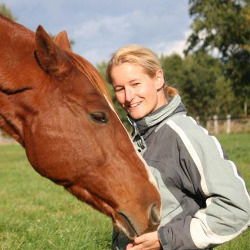 Anne Mößeler received her veterinary degree 2002 at the University of Veterinary Medicine in Hannover. The doctoral thesis was finished in 2004 (dealing with the effects of different carbohydrates on fermentation in healthy horses). After passing the exam for german specalisation for Animal nutrition and dietetics in 2009 she passed the exam of the ECVCN. in 2010. Working at the Institute for Animal Nutrition in Hannover since 2004 she worked on swine nutrition with focus on infectious diseases (E. coli diarrhea) and gastric ulcers. Since 2006 the work is also focussed on studies using the pig as a model for human digestive physiology with special emphasis on the function of the exocrine pancreas and the diverese effects of pancreatic exocrine insufficiency in adults as well as in juveniles.
In 2017 a practice for Veterinary Consultation was founded - focussing on horses, dogs and cats. Anne Mößeler was secretary of the ECVCN for 6 years and is vice-president since 2020.