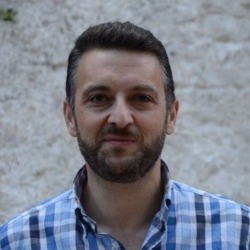 Theofilos is working as Laboratory Director in the Directorate of Veterinary Centre of Thessaloniki, which provides services for the Greek Ministry of Rural Development and Food.

He qualified (DVM) from Aristotle University of Thessaloniki in 2003 and holds a MSc diploma (2008) in Aquatic Animal Health, and a MSc in Public Health (2011). In 2015, Theofilos awarded a PhD in Molecular Microbiology-Epidemiology of Salmonella from the Faculty of Veterinary Medicine in Thessaloniki. In 2016, he followed the ECDC Fellowship Programme (Intervention Epidemiology-EPIET) in SCIENSANO-Belgium. In 2020, he followed the European Food Risk Assessment Fellowship Programme (EU-FORA) in Polytechnical University of Cartagena-Spain.
Theofilos has worked for several years, as an Official Veterinary Surgeon, in the areas of surveillance and control of zoonoses, food safety and Public Health, in the Greek National Agricultural Research Foundation (NAGREF) and in the State Region of Western Macedonia (Greece). He has also worked in Scientific Institute of Public Health (SCIENSANO) in Belgium as a research associate in Department of Epidemiology. He also worked in the Laboratory of Gastrointestinal pathogens in Public Health England-Colindale (former HPA) and in the School of Agricultural Engineering Polytechnic University of Cartagena as a scientific associate. Currently he is affiliated as Research Associate in the School of Veterinary Medicine-Aristotle University, and he was appointed as Residency Supervisor in the new ECVM-approved training center.
He has special interest in the investigation of the antimicrobial resistance and antimicrobial stewardship in companion and food animals (with emphasis in MRSA and Salmonella), One Health approach, animal, and zoonotic diseases. He also works in epidemiological analysis of the National surveillance data (brucellosis, tuberculosis, lumpy skin disease and BSE) and lately in Quantitative Microbiological Risk Assessment. He also has ongoing collaborative work with medical microbiologists in several University Hospitals and the National School of Public Health, which involves surveillance and control of antimicrobial resistance in Greek hospitals.
Theofilos is active member and National representative in several COST actions in the field of Microbiology and epidemiology (ENOVAT, SOUND, PiGutNet, NEOH, AMICI). He is also a member of the European Study Group for Veterinary Microbiology (ESGVM) and the European Study Group for Public Health Microbiology (ESGPHM), parts of the European Society for Microbiology and Infectious Diseases (ESCMID).