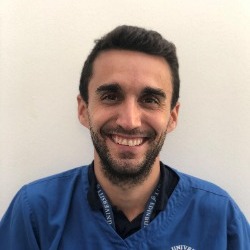 Pablo graduated from the Universitat Autònoma de Barcelona in 2012, followed by a rotating small animal internship in the same institution. He worked in general practice for 6 months before moving to the UK. Pablo completed a 6-month externship in Neurology and a second rotating small animal internship, both at the Hospital for Small Animals of the University of Edinburgh. In 2016, he began a residency in Neurology/Neurosurgery at the Small Animal Hospital of the University of Glasgow. In 2019, Pablo joined the Neurology Service of the Hospital for Small Animals as Lecturer in Neurology. He was awarded the ECVN diploma in 2020.