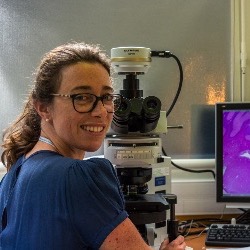 Dr Marine Carlus received her veterinary degree from the National Veterinary School of Nantes (Oniris), France, in 2008, and a MSc in Biology, Biotechnologies and Therapeutic Research the same year from the University of Nantes. She followed a 3-year pathology residency program at Veterinary Schools of Nantes and Maisons-Alfort, France and obtained the French Pathology Certification (DESV-AP) in 2011.

Dr Carlus is an independent consultant pathologist since 2015 (www.carluspathologyconsulting.com). She has been working for 5 years at the Galli-Valerio Institute in Lausanne, Switzerland, a public veterinary laboratory, and before that she worked for 1,5 years at CiToxLAB, a CRO based in Normandy, France, as a Veterinary Pathologist in Preclinical Toxicity Studies. Dr Carlus also worked in the Pathology Unit of the Veterinary School of Maisons-Alfort near Paris, France for 2 years and at Oncovet Clinical Research, Villeneuve d'Ascq, France as a Veterinary Pathologist in Diagnostic Pathology and as a Research Engineer.
She has authored/co-authored several peer-reviewed publications (articles, case reports) in various pathology fields.