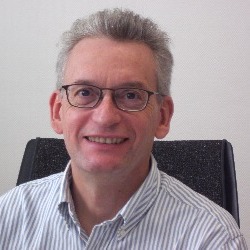 Alain Bousquet-Mélou graduated from Toulouse veterinary school in 1988. After graduation, he completed a PhD in molecular pharmacology at the University of Toulouse and INSERM, the French National Institute of Health and Medical Research in 1995. He became Doctor in Veterinary Medicine (DMV) in 1995. In 1996 he was appointed as Associate professor at the Veterinary School of Toulouse (1996-2008), where he is currently Professor of pharmacology and therapeutics.
His main research interests are pharmacokinetics, pharmacodynamics and modelling of veterinary drugs, and particularly antibiotics. He currently leads a research group that explores the relations between antimicrobial dosage regimens and emergence of bacterial resistances. He is expert for the French Agency for Food, Environmental and Occupational Health & Safety. Member of the former French Veterinary Drugs Authorization Comity (2011-2015), he chaired the French working group on the re-evaluation of veterinary antibiotics dosage regimens (2015-2016). He is member of the Veterinary Committee on Antimicrobial Susceptibility Testing (VetCAST) a sub-committee of EUCAST.
Alain Bousquet-Mélou supervised (past and present) 15 PhD/Post-doc programs. He has published 114 peer-reviewed scientific papers in human and animal pharmacology.
He is involved in EU projects in the field of therapeutic innovations to combat antimicrobial resistance (JPI-AMR-2015: CO-ACTION, 2016-2019; JPI-AMR-2018: Flav4AMR, 2019-2023), antimicrobial susceptibility testing (JPI-AMR-2016: VetCAST, 2017) and alternative production system to address antimicrobial drug usage, animal welfare and the impact on health (H2020-SFS-46-2017: HealthyLivestock, 2018-2023).
He served as secretary of the European College of Veterinary Pharmacology and Toxicology.(2012-2018).