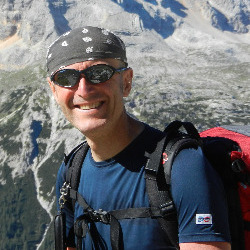 Mauro Dacasto was awarded a Degree in Veterinary Medicine by the University of Turin (UNITU) in 1988 and licensed to practice veterinary medicine. In 1993, he was awarded a PhD in Epizoology, Epidemiology and Chemotherapy of Parasitic Diseases by the same university. In 1994 he became a post-doctoral researcher at UNITU and assumed positions of increasing responsibility up to Associate Professor in Veterinary pharmacology and toxicology up until 2002, the year he gained de facto Diplomate status of the ECVPT. During this period he was a visiting scientist at the Laboratoire de Pharmacologie et Toxicologie (UR66), Institut National de la Recherche Agronomique (INRA), Toulouse (France), supported by fellowships from: European Association for Veterinary Pharmacology and Toxicology (EAVPT, 1994), Italian National Research Council (1997, 1998), Italian Treasurer Ministry (1997), and the OECD (1998) In 2003 he joined the University of Padua (UNIPD) as Associate Professor in Veterinary Pharmacology and Toxicology and in 2014 became a Full Professor in veterinary pharmacology and toxicology following national habilitation as a Full Professor in veterinary clinical medicine and pharmacology.

Mauro's research interests include comparative in vitro and in vivo studies on the expression and regulation of drug metabolizing enzymes (P450-dependent monooxygenases, conjugative enzymes, drug transporters), studies on xenobiotic molecular and cellular toxicity, veterinary oncology and cancer chemotherapy and veterinary pharmacogenetics and toxicogenomics. He is a member of the EAVPT. He is author or co-author of more than 90 full papers in peer-reviewed journals. He has served as a member of the ECVPT examination committee since 2012 and up to 2021.