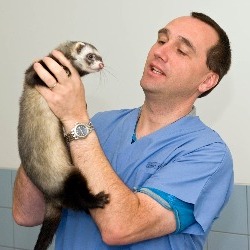 Nico Schoemaker graduated as veterinarian in February 1994. Since then, he has followed an internship in companion animal medicine and a residency in Avian Medicine and Surgery at the Department of Clinical Sciences of Companion Animals at Utrecht University. The avian residency was recognized in the USA (ABVP) as well as in Europe (ECAMS), allowing him to follow both programs simultaneously. Since 1998 Nico is a Diplomate of the European College of Avian Medicine and Surgery. By passing the exam, Nico became the first veterinarian in the Netherlands to become an avian specialist after following the residency and passing the exam.

In 2003 Nico defended his PhD on hyperadrenocorticism in ferrets. During this study, Nico proposed a new hypothesis on the etiology of this common disease and a potential way to decrease the incidence on the occurence of this disease. Research is still ongoing to support these hypotheses.

Through his research on adrenal tumors in ferrets, Nico has been named a "ferret specialist" by owners and veterinary practitioners (although this is not an official title).

Since 2009 the European College of Zoological Medicine was established, which now incorporates the avian specialty, but now also includes all other specialties dealing with exotic animal medicine. At the time of establishment of this new college, Nico was a "founding member" of the small mammal specialty and is since also a Diplomate in Small Mammal Medicine. He thereby became the first Small Mammal specialist in the Netherlands.

As a clinician-specialist at the Division of Zoological Medicine Nico predominantly treats small mammals and birds, although he will see and treat reptiles as well. Aside from being a clinician Nico is heavily involved in all aspects of teaching at a university setting and performing research. The latter is focused on adrenal tumors in ferrets, relevant clinical topics in avian and small mammal medicine as well as studies into feather damaging behaviour in parrots.