I was born in the City of Brussels, the small centre of the Brussels Capital Region, on 21 May 1965. I grew up close to the historical centre of Brussels and spent most of my time in the Parc Royal next to the Atomium, my house being only a few 100 metres from there. I was an only child in a family with a heart for animals and as a teenager I loved to help out my uncle, who was a blacksmith. He taught me how to handle and care for horses. My love for animals developed as an obvious and natural thing.

I wasn't much interested in school. I had a g 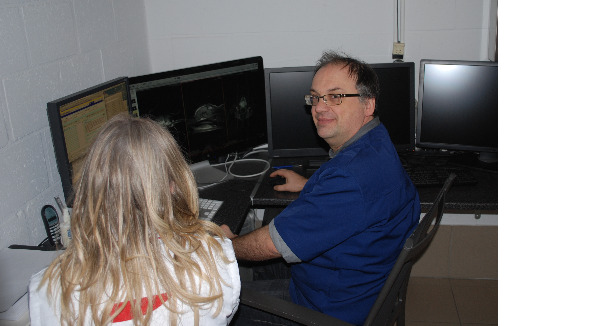 reat passion for basketball and cycling and spent every free hour on the courts or on my bike. (Un)fortunately, I was just not good enough for a professional career in sports, otherwise veterinary medicine would have gone out the window.

Military service at 18 years old in the depths of Germany (mandatory for every young man in Belgium until abolished in 2004) put an end to my 'yolo' way of life and got me thinking about my future. At that time, I hesitated between human and veterinary medicine. However, animals seemed to me much more easy-going patients than people and I went for veterinary studies. I got married when I was still a student and our first daughter was born the same year. I graduated from the University of Liège (Belgium) in 1993. The great thing about the University of Liège is its location: on the famous cycling route Liège-Bastogne-Liège. I spent a lot of time on my bicycle.

After my graduation, I immediately joined the Department of Veterinary Medical Imaging of the same Faculty and started a year of research on MRI of the canine elbow joint. Diagnostic imaging was not a vocation as such but I was passionate about physics so medical imaging seemed an acceptable option. I was hired as a substitute for a pregnancy leave and my initial plan was to stay one year in the department of medical imaging and then leave with my family for private practice in the south of France. Finally, due to circumstances, I stayed two extra years and I obtained the Certificate in Veterinary Radiology (CertVR) of the RCVS. After this I could stay three more years and I completed an alternative residency program in Diagnostic Imaging. Finally, my wife and I ended up staying in Liège for six years and during my residency, we also celebrated the birth of our second and third daughters.

I became Diplomate of the ECVDI in 1999 and changed jobs to Ghent University, at the Department of Medical Imaging of Domestic Animals and Orthopaedics of Small Animals, moving my family with me to Flanders. The relocation was difficult: the children suddenly went to a Flemish school, my wife had to drive far to work and I needed to perfect my Dutch in a very short time. In Ghent I performed orthopaedic exams in horses during two years before returning full-time in medical imaging. In 2003 I completed my PhD on CT and MRI of canine nasal aspergillosis. My wife and I went our separate ways in that same year. The following years were mostly spent on research and clinical work at the faculty and on my secretary work for the ECVDI. For indeed, after my PhD I swiftly joined the Board of the ECVDI as secretary from 2004 till 2010, vice-president and then President from 2010 till 2012. During this period the EBVS launched the LA track alongside the general track, which for years was small animal-oriented. Also, the radiation oncology add-on with the ECVIM-CA was finalized.

In 2006 I met my current wife and we now have two young children together: a daughter and against all odds, a son. Between 2009 and 2011, I spend most of my free time writing a book on computed tomography of all species entitled ‘Veterinary Computed Tomography’ with my friend Tobias Schwarz. In 2011, at Ghent University, I was elected chair of the Study Programme Committee. Since then this function has taken up a lot of my time. In 2013 I started writing a new veterinary study programme, which was finalized and accepted by the University Board in January 2016. The EAEVE visitation and the new quality assurance system of Education adopted by Ghent University in 2016 cost me a lot of time but also taught me so much about quality assurance in the educational process. In October 2015, I became Head of the Department of Veterinary Medical Imaging and Orthopaedics of Small Animals.

Over the last few years, I have participated to the EBVS Annual meetings from 2009 till 2014, performing reviews of reports and acting as a liaison officer on a regular basis. The EBVS is at a turning point as this is a crucial moment for the organization to prove itself and obtain a European recognition. More than ever it is essential to continue what our predecessors have started, particularly when it comes to the quality of the work done by the Colleges. It is time to perfect and show ourselves and I am very happy to be able to participate in this project.